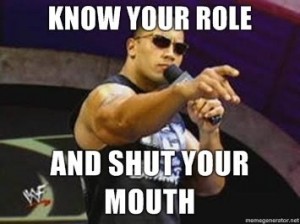 Last Wednesday’s Word was exposure – an encounter that brings light or reveals something.  Recently, I was exposed to several new, awesome and intimidating things. I journaled my thoughts, knowing that one day these things would be a part of my life. I had a lot of questions, and some anxiety. The Holy Spirit replied, “I just need you to acquiesce and agree.”  My first thought was, “Isn’t that the same thing?” Agree means that you will do, allow, or accept something that is suggested or requested by another person. Yet the Lord was deliberate in using the word acquiesce. He says weird words I don’t normally use so I know it’s Him and not me, lol! So, I looked it up. ACQUIESCE – means to accept, agree, or allow something to happen BY staying silent or BY not arguing. I couldn’t put it any better than the Rock does in this meme.  God was saying, “I’m not asking you to do or question it.  Be quiet! Let Me accomplish it.”

In Luke 1, Zacharias and his wife Elisabeth were barren, old, and had prayed for years for a child to no avail.  They were righteous people who loved God, but what they desired seemed unlikely, if not impossible. Zacharias was a priest, which made the delay even more public and shaming. The angel of the Lord appeared to Zacharias and said, “Fear not, Zacharias: for thy prayer is heard; and thy wife Elisabeth shall bear thee a son, and thou shalt call his name John. And thou shalt have joy and gladness; and many shall rejoice at his birth.” (L

uke 1:13-14) John would be a great prophet who would turn many people back to the Lord. (16-17) Zacharias, started in with the questions…“Whereby shall I know this? for I am an old man, and my wife well-stricken in years.” The angel Gabriel replied that he was sent to bring the glad tidings, then executed this judgment on Zacharias: “And, behold, thou shalt be dumb, and not able to speak, until the day that these things shall be performed, because thou believest not my words, which shall be fulfilled in their season.” (Luke 1:20) What if God shut our mouths when we didn’t believe?

Zacharias and Elisabeth in God’s time, would be a part of the greatest story ever told.  The Messiah would be conceived by their cousin Mary, a virgin, and their reproach would be wiped away by the birth of His forerunner, John the Baptist.  “For with God nothing shall be impossible.” (vs 37) Zacharias did not speak until after his son was born. The people tried to name him Zacharias Jr. but he wrote down, “His name is John.” Immediately his mouth was opened again and his first words were praises to God and prophesy about what God would do through his son, this precious gift he’d received despite his questioning! (vs.59-80) Some of what God has promised, ONLY HE can bring to pass! Your job is to agree with God and ACQUIESCE – accept what He has said, allow Him to do it, know your role…and shut your mouth!!