A holding pattern is a maneuver designed to delay an aircraft already in flight while keeping it in a specified airspace.  The aircraft have arrived at its destination, but cannot land yet because of traffic congestion, poor weather, or runway unavailability.  Several aircraft may fly in the same holding stack at lower speeds to save fuel, separated vertically by 1,000 feet or more.   New arrivals will be added at the top. The aircraft at the bottom of the stack will be taken out and allowed to make an approach first, and so on.  Air Traffic Control controls the whole process.

Here is a simple holding pattern, the planes are traveling basically in circles.  The new plane comes on top and follows the circular pattern.

For passengers, a holding pattern can bring anxiety and frustration.  You’re scheduled to land at a certain time, now you’re delayed.  You might have a connecting flight.  You’ve  begun the descent, are low enough to see the ground, yet you’ve slowed down and are going around and around!  If you dislike flying you just want to land and get on the ground safely.

Sometimes in life, we’re close to our desire/dream and it is as if God’s hand slows us and start us

circling, right when we’re almost there!  Why? What is holding things up?  Is there danger?  We don’t know who else is held up with us (nor do we care), or what order we are in for landing. GOD, who controls the air,  each passenger and the aircraft, will allow us to land at our destination when it seems best to HIM.

Zacharias the priest and his wife Elizabeth were faithful and righteous saints…but in a holding pattern.  Zacharias had prayed for a child for years.  The angel Gabriel appeared to him saying, “Do not be afraid, Zechariah; your prayer has been heard. Your wife Elizabeth will bear you a son, and you are to call him John.” (Luke 1:13) The couple was older, and had been flying on life’s journey desiring offspring for so long, that Zacharias couldn’t believe it was true. “How can I be sure of this? I am old and my wife is well along in years.” (vs 18)  He thought it was too late…even impossible at their age. God’s Word is true and His timing is perfect, though to us it seems delayed. To stop him from speaking unbelief, the Lord held Zacharias’ tongue from confessing his doubts, but He did not stop their appointment with destiny!  They didn’t know the holding pattern and the timing of their baby’s arrival was to coincide with the landing of another plane, that of Mary and Joseph, which carried John’s cousin JESUS! the Messiah! the Savior of the world!

Are you in a holding pattern today? Does it seem like God is delaying you? slowing you down? Is He having you go around in circles when the destination is so close you can see it? Is He letting other planes land before yours? Trust Him to land YOU safely at YOUR destination in HIS perfect timing! 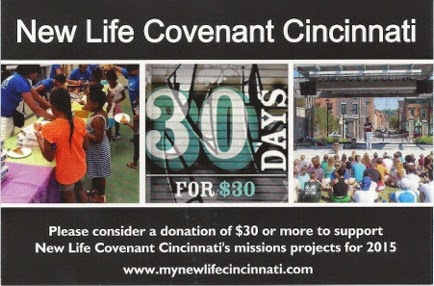 Our 2nd Anniversary 30 for $30 campaign has begun! We’re raising funds for the missions projects we’ll do in 2015: events for children, HopeFest & Worship in the Park, serving the needy in the Downtown/West End & Over the Rhine Communities and beyond.  Please  donate of $30 or more by clicking this link:   DONATE HERE “We pay a price when we deprive children of the exposure to the values, principles, and education they need to make them good citizens.” – Sandra Day O’Connor – Supreme “I do not believe that sheer suffering teaches. If suffering alone taught, all the world would be wise, since everyone suffers. To suffering must be added mourning, understanding, patience, love,