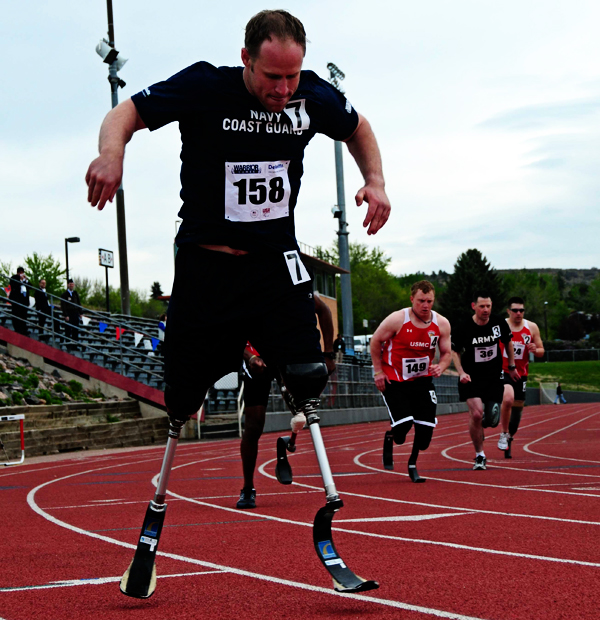 Resilience is the ability of a substance or object to spring back into shape; elasticity. It is the capacity to recover quickly from difficulty; toughness. I admire those like this soldier, who for the sake of a greater call, have suffered great losses and set backs. They possess an indomitable spirit: one that is impossible to subdue or defeat.  Where most would have given up and quit, they continue on to do what seemingly could not be done.

Nelson Mandela, endured 27 years of what was meant to be a will–crushing imprisonment, fighting against the injustices of apartheid in South Africa. He was locked up at age 46 and released at 73. Most of us would have emerged with our spirit broken, just grateful to be alive and free, and certainly resentful of our captors.  Not Mandela, he arose with strength and grace, with a forgiving heart, and the will to lead not only those who had battled with him, but those who fought against him. President Mandela  said, “The greatest glory in living lies not in never falling, but in rising every time we fall.” Resilience.
Jesus, suffered the greatest agony ever known to be our atoning

sacrifice: the anxiety of the Garden of Gethsemane, an unjust trial, and the cruelest death by crucifixion. He was not only marred physically until unrecognizable; He carried the entire weight of sin for the whole world, past, present, and future. He felt the separation from His Father that sin brings, “My God, my God, why hast Thou forsaken me?” (Matt. 27:46)  Jesus was not only left for dead; He was dead, and buried. But on the third day, He bounced back! rising from the dead with a glorified body, appearing to His disciples many times, showing them his wounds, and even walking through walls!  Jesus emerged not as a suffering Savior, but as God and King! and the same power that raised Jesus from the dead dwells in us!
If the Spirit of him who raised Jesus from the dead dwells in you, he who raised Christ Jesus from the dead will also give life to your mortal bodies through his Spirit who dwells in you.(Romans 8:11)

We can bounce back from sin, faults and failures. When we die, those who have received Jesus as Lord and Savior will live again eternally with Him!  Even now in this earth, if we have a spirit of resiliency that is willing to go through whatever it takes… we can recover! What was dead can be raised! What was hurt can be healed! The broken can be restored! What was lost can be found!